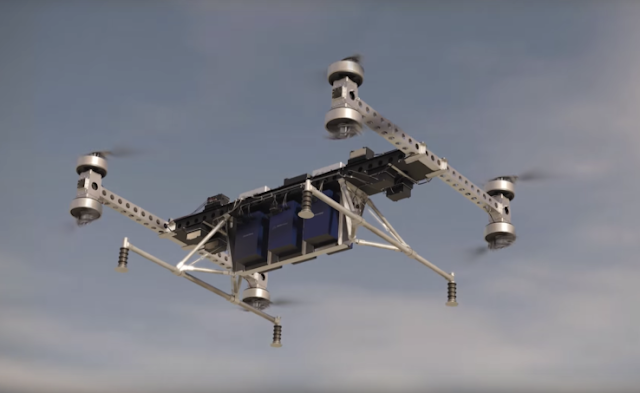 Boeing has unveiled a prototype drone with the ability to carry objects weighing as much as 500 lbs (roughly 227 Kg). The Company which primarily manufactures Airplanes gave its engineers an objective of constructing a cargo drone, and boy! did they do justice to it!

The drone is large and looks a lot like Sci-fi stuff, but it's as real as the sun which rises from the east and settles in the west. it's weight sits at 747 pounds with dimensions of 4 feet height, 8 feet width and 15 feet length. It features eight propellers with each pair held by one support. Boeing engineers had to work tirelessly for three months to arrive at this end stage from design concept to final touch. It completed a test run in Boeing’s research lab in Missouri.

Boeing chief technology officer Greg Hyslop in affirmation of the program said “This flying cargo air vehicle represents another major step in our Boeing eVTOL strategy, We have an opportunity to really change air travel and transport, and we’ll look back on this day as a major step in that journey.”

A comprehensive Flight Specification of the vehicle detailing speed, range, latency response time and a whole lot others, all for now remains Unknown as the company is yet to make any further unravelments. This cargo drone is beyond doubt ready to set the pace for other technologies of this nature to follow.