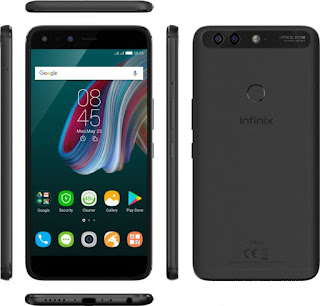 Benevolently simple but Elegant, is the Infinix Zero 5. Just having been released in Dubai a little over a month ago, this device is already causing a lot of shock waves in the marketplace. It's honestly a device that is capable of complementing your Fashion style as well satisfying your cravings for more advanced models of the Brand.

Infinix Zero 5 entails a 5.98 inches screen with Full HD display, the screen has a resolution of 1080 by 1920 pixels with about 368 pixels per-square inch.With a powerful Octa-core processor that clocks at 2.6 GHz with Mediatek Helio P25 and On-board RAM capacity of 6GB it is certain to give you a high-grade performance. It comes pre-installed wit Android 7.0 Nougat, but due to it's status as a flagship device it has good odds of receiving an Android 8.0 Oreo update.

It boasts of a dual rear camera of 12 megapixels and 13 megapixels with a single LED flash all summed up to give you breath-taking Photo-shots. The 16 megapixels Front camera also has it’s own LED flash at it’s side. Refusing to rest on its Oars, Infinix Zero 5 has had it's battery threshold pushed even further to 4350 mAh, up From 3200 mAh of it's predecessor Zero 4, with an added speedy-charge Functionality.

Infinix Zero 5 exists in two internal storage variants; the 64GB and 128GB. However, Should either Variant be limiting, one can have the External Memory increased to as high as 2TB through an external SD card.

As an observable trend among Major Players in the Smartphone Industry, the phone has a fingerprint scanner positioned at the back below the camera region, so you get improved Security for your personal information and files as well as protection from Unwanted access. Being a dual Micro SIM Android phone which supports dual standby with 4G network, it is set to appear in a range of colors; from Gold, Apple Red to Matte Black colors. Infinix Zero 5 prices roam around 290 USD, roughly  105,000 naira in Nigeria, 30,071 Ksh in Kenya, Rs. 18,428 in India and 32,126 PKR in Pakistan. 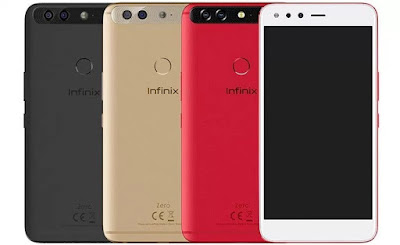